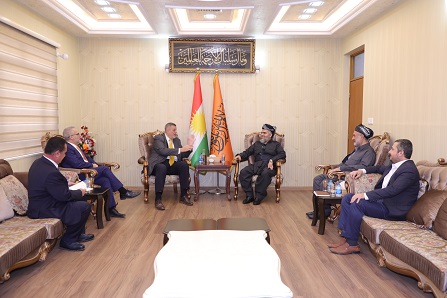 Mr. Ali Bapir the Emir of the Kurdistan Islamic Komal (KIK) in his special office receives Yan Kubish the UN Special Envoy in Iraq and Ricardo Rodriguez the Head of United Nations Mission to Iraq– Erbil Regional Office, in the meeting they discussed the election of 30th September and its secretions. Also, the Iraqi political process and the new government with its role and effect on the future of Iraq and Kurdistan are negated. However, locally and regionally rapid changes and the effect of American policy on the area are being discussed.
Mr. Ali Bapir confirmed about the last election that the impartial election is the best way to hand over the power, and said that because of fraud in the election which was often done by who has power, makes the election process unfair. That is why the people don’t trust them and as a result the rate of participating people was decreased.
According to forming Iraqi government He said, we wish the Iraqi prime minister has a reality read to the state and its consistency also heed more to solve the issues that still remain between Baghdad and Erbil with justice he can practice his responsibilities, outside interventions don’t slip him in main route of the Iraqi Government.
And also Mr. Ali Bapir pointed that Kurdish must fairly treat the issues and do not harm their national cases by making quarrel on posts.

Dec 1, 2018
Sheikh Ali Babir's call for the protection of Christians and the followers of other religions
Ali Bapir’s channel on YouTube
«
Prev
1
/
511
Next
»