Sheikh Ali Bapir, the Chair of Komal received a delegation from the United Nations Mission in Iraq. 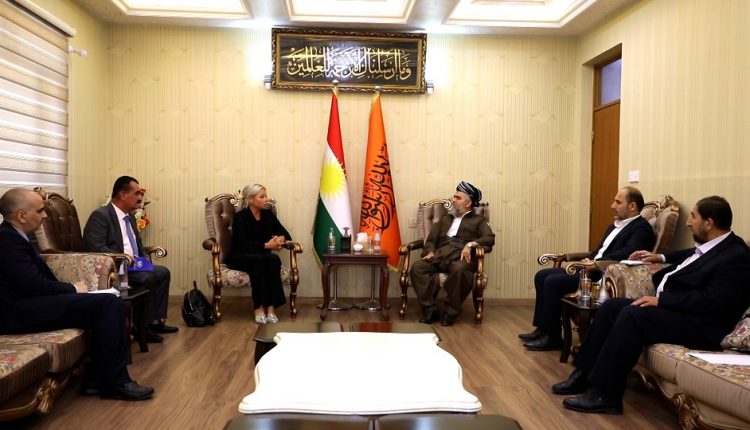 Sheikh Ali Bapir, the Chair of Komal received a delegation from the United Nations Mission in Iraq.

Sheikh Ali Bapir, the Chair of Kurdistan Islamic Group (Komal) on Monday, the 6th of July 2020 received the envoy of the United Nations Assistance Mission for Iraq (UNAMI), Ms. Jeanine Hennis-Plasschaert. The meeting between the Chair of Komal and Ms. Hennis-Plasschaert took place in Sheikh Bapir’s special Headquarter in Erbil.

The meeting mainly focused on the latest political developments of Iraq following the formation of the new Iraqi cabinet and the vanishing of massive anti-government protests in south and central Iraq.

During the closed-door session, the recent efforts for settling the long-running conflicts between Erbil and Baghdad were discussed in detail. Both sides stressed that reaching a binding and fair agreement between the two parties is the excellent and wise choice. In addition, both Sheikh Bapir and Ms. Hennis-Plasschaert shared the same views on the need of taking up a unified position by Kurdish government for resolving the bilateral issues with Baghdad.

On his part, Sheikh Bapir plainly stated that for settling the disputes between the Kurdistan Regional Government (KRG) and Federal government of Iraq, KRG should take lessons from the past, unify its political posture based on justice and constantly strive for its constitutional rights.

In the joint meeting, the two similarly discussed bombardment of villages on Kurdistan border and strongly reaffirmed that the political issues should be solved peacefully.

Dec 1, 2018
Sheikh Ali Babir's call for the protection of Christians and the followers of other religions
Ali Bapir’s channel on YouTube
«
Prev
1
/
505
Next
»